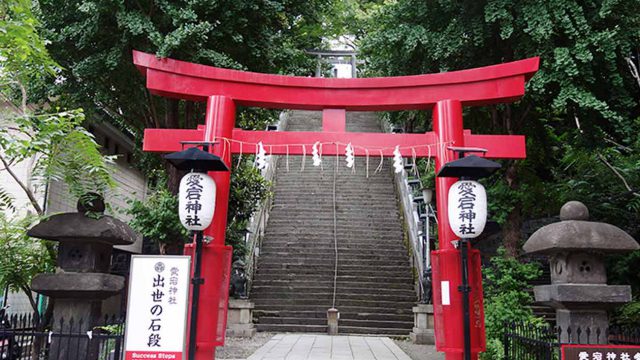 In Edo era, Shogun, Ieyasu Tokugawa carried out city planning getting ideas from Kyoto as a model city. In this course, he made grande sightseeing places in Edo. Atagi-jinja shrine was one of those places which won a reputation in Edo. He named it after Atagoyama(Mt.Atago) in Kyoto and constructed Atago-jinja shrine for fire prevention and the other benefits in 1603. Regretfully, Agtagoyama in Kyoto is much higher than Agatoyama in Edo.

Here, I put some pictures Atago-jinja shrine. Atago- shrine is on the top of Mt.Atago (Atago-), which is the highest natural mountain(25.7m) among all of 23 .   This place had been widely known for its beautiful scenery top of the mountain in Edo and Meiji era.  It commanded a wonderful view on Tokyo bay then.   Unfortunately, we cannot see Tokyo Bay any more on the top because of the reclaimed land and high-rise buildings.

It is interesting to compare the Ukiyoe, wood-cut prints of Atago-jinja shrine with the current picture of that.  The second image below is “Ukiyoe of Atagoyama by Shotei Hokuju in Edo era”  The third one is the work of Kunisada Utagawa.

The steep steps in the pictures are called “Success steps” and famous for the following episode.

“In the Edo period, a famous Samurai named Magaki-Heikurou went up and down the steps riding a horse.
Since then he succeeded in his life. These days people share his good luck and go up the stairs to wish for their success”
from the signboard of Atago Jinja shrine

Access: Walkable from Kamiyacho station(Hibiya line),Onarimon(Toei Mita Line)  You can use an elevator just beside the tunnel to go up to the shrine.

Hi! I am Maco. View all posts by maco