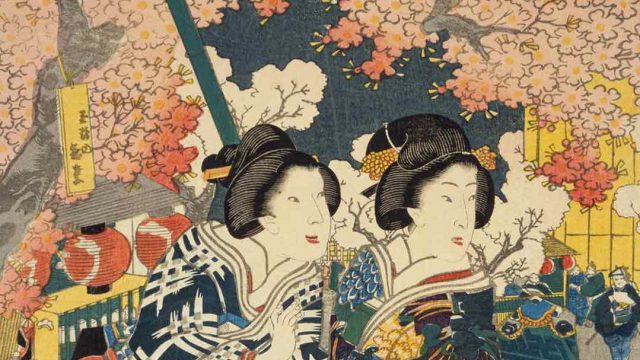 Asakusa Hanayashiki is the oldest amusement park in Japan. Please click the link to make sure the place→ Map.

First of all, I tell you that Hana-Yashiki means flower(Hana)-residence(Yashiki).
Whilst we can now ride a Roller coaster and Space shot there, it was originally, a flower park.  Civilians enjoyed seeing plum blossoms and cherry blossoms in Hana-Yashiki.  The record says that a lot of cherry trees were planted in the site of Asakusa Sensoji temple in 1852.
In fact, we can find Ukiyo-e of Asakusa Sensoji shrine, “Okuyama(mountain), cherry blossoms in their peak”, by Kunisada Utagawa(1857) as follows;

Shamefully, I did not know that Hana-yashiki used to be a flower-park in Edo-period.  Rather, I thought that it had been an amusement park ever since it was constructed.

Asakusa from a city planning point of view

In the Feng shui based Edo city planning, temples were to be placed on the high land to protect a city from evil.  On the contrary,  the vulgar were thought to stay on the lower, muddy land.  In fact, the lowest rank of Japan’s caste system was forced to live on the low land, that is, the area along a river in Edo-period.

Walking around Sensoji, we realize that we do not find steep hills and steps. The ground is almost flat. In addition, as seen in the above Ukiyo-e, the streams and ponds were in the site of Sensoji. Moreover, a Kabuki theater was built in the back of Sensoji as well as some brothels near the temple.
Considering these facts, the area around Sensoji area looked like sort of the low land, where the vulgar stayed.

Ultimately, Asakusa has been an entertainment area which has attracted a number of people in different ways over centuries and Sensoji temple has been the key sightseeing place.
As Sensoji was the oldest temple in Tokyo, it was not always directly under the influence of the Edo-period city planning. It just happened to be there.

Hi! I am Maco. View all posts by maco